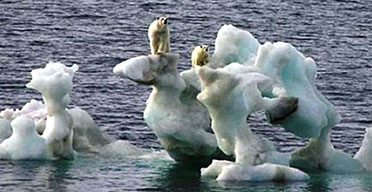 Well, it seems to be ‘official” …. but in reality, we knew this a long time ago, and action should have been taken worldwide, then.
Shoulda, woulda, coulda.

The warning came in a draft U.N. report on climate change released today, in Paris France, that projects a big rise in temperatures this century and warns of more heat waves, floods, hurricanes, droughts and rising seas linked to greenhouse gases.

“The final version of the report, regarded as the most comprehensive study on climate change, predicted sea levels rising 7 to 23 inches by 2100, but added that oceans could rise much faster if ice sheets rapidly disappear.” … Furthermore, the report “suggests average temperatures could rise more than expected – by as much as 6.4C by 2100, unless greenhouse gas emissions are reined in. “

With the statement “Oceans, soil and trees will become worse at absorbing carbon dioxide as temperatures rise“, I can’t help but wince at the thought of our rainforests, and the accelerated rate at which they are being harvested (40 species and 20 acres of rain forest are killed per minute). Less trees means even LESS possibility of carbon dioxide absorption. So not only is our use of fossil fuels spurring the changing of temperatures, our raping of the earth’s soils and forests is accelerating the earth’s untimely demise (as we know it, I believe).

“To waste, to destroy our natural resources, to skin and exhaust the land will result in undermining in the days of our children the very prosperity which we ought by right to hand down to them.”
The California Center for Strategic Studies

What’s happening to our priorities? Concern for the environment should be regarded as non-partisan and non-political issue. WE are responsible for our World. Individual belief and action goes farther than any government policy can ever dream or hope. However, it doesn’t help when the politicians decide to ignore the relevant issues at hand. For example, Bush is proposing that $245 billion more be spent on a War that is without meaning, cause or direction. Why not devote that money towards a cause(s) much more worthwhile?

There are a plethora of positive ways to invest our efforts and the World’s financial resources in bringing on change, growth and a future filled with hope rather than Apocalyptic predictions and realities (and these are my own personal beliefs, skimming only the bottom of the bucket, per se):

Call me a hippy but I truly believe that Make Peace and Not War should be our Global Initiative and Mantra. Our mission on Mother Earth should be (as the California Center for Strategic Studies quotes) Securing World Peace, Fostering Human Rights, and Promoting Sustainable Prosperity.

I believe that this is the first step in a positive direction, where the road ahead of us will be filled with global environmental issues, tragedies and realities which far supersede the aggressive and arrogant behaviour of a Government more intent on ‘winning’ than peaceful living in our present reality. Ignorance is not bliss. Both Individual and Government action is necessary if we want to pave a Yellow brick road for the future for our children, rather than dig their graves (and potentially our own).

This is my rant for today.
Amen.

What a wonderful fantastical Tim Burton movie …. ‘Corpse Bride‘ is a stop-motion claymation film that I recommend to ANYBODY. Corpse Bride carries on in the dark, romantic tradition of Tim Burton’s classic films Edward Scissorhands and The Nightmare Before Christmas. Brilliant voice cast behind the characters. I would love to watch it again! Watching…

1. Take a 10-30 minute walk every day. And while you walk, smile. It is the ultimate anti-depressant. 2. Sit in silence for at least 10 minutes each day. Talk to God about what is going on in your life. Buy a lock if you have to. 3. When you wake up in the morning…

After stopping briefly to reload our luggage into the car, we offered gifts of good tidings to slaDE~s sister Sherry and son Ritchie, before heading to my Mom’s for a family Christmas gathering. My younger sister Aaron was already there and Sylvia (our adopted Aunt) was soon to arrive thereafter. The day was carefree and…

This menu is another really useful guide if you’re considering attempting a general detox. My herbal plan similarly follows this in the pre-cleanse phase for the first 2 weeks (with additional doses of psyllium fibre ‘shots’ twice per day). The two weeks following this, my regime is quite more diligent and precisely monitored. I’m on…

One of my most precious memories this summer has been rafting down the Bow River with my beloved Bill, as his first mate. A remarkable nimble Captain he was, keeping us dry, entertained and safe from crashing into the many piers along our 3 hour tour. I wanted to share just one of the captured…